New publication "The Crucigers. Caspar the Elder, Caspar the Younger and Elisabeth Cruciger and their Importance for the Wittenberg Reformation" edited by Irene Dingel and Armin Kohnle 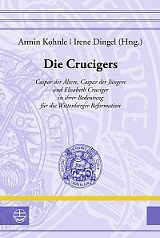 The Cruciger family played an important role in the early history of the Reformation. Caspar Cruciger the Elder belonged to the closest circle of the Wittenberg reformers around Luther and Melanchthon. His first wife Elisabeth is known as the author of the hymn »Herr Christ, der einig Gotts Sohn«, which is still found in the Protestant hymn book. Less well known is Caspar Cruciger the Younger, who, as a zealous student of Melanchthon, took over his teacher's classes after his teacher's death, but soon became entangled in the theological disputes at the University of Wittenberg and lost his job.