Video-documentation with Mihai Grigore: Paths of the Monks - Paths of Power Trans-imperial | Episode 1 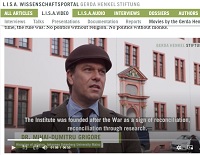 Today starts the six-part video series "Transimperial" on the project by IEG associated scientist Mihai Grigore, which the Gerda Henkel Foundation's is funding. The episodes about the lives of four Orthodox churchmen of the late Middle Ages and early modern times from Antioch to Moscow and their influence on politics appear as a video and as a podcast.
picture rights: film still of the video von L.I.S.A., Rechte: L.I.S.A.

The Danubian principalities of Wallachia and Moldavia were important centers in the late Middle Ages and early modern period. In the borderland between the Christian Orthodox and Islamic Ottoman worlds, they functioned as nodes of political, cultural and religious mobility. In this system, mobile monks and churchmen were of particular importance. In a research project funded by the Gerda Henkel Foundation, church and religious historian Dr. Mihai-Dumitru Grigore traces the lives of four Orthodox churchmen from Antioch to Moscow and traces how they influenced the processes of rule in a vast transimperial space. For at that time, the rule was: No politics without religion. No politics without monks.

The project, led by Dr. Mihai-Dumitru Grigore of the Leibniz Institute for European History in Mainz, examines the connection between mobility and rulership in the transimperial Orthodox region of Southeastern and Eastern Europe between the 14th and 17th centuries. It sheds light on how religious knowledge and religious-political programs spread in Southern and Eastern Europe and served as a resource for dominions. We follow the lives and itineraries of four churchmen of the late Middle Ages and early modern period in the vast space from Antioch to Moscow. How were the churchmen networked? In which environment did they stay? How did they pursue politico-religious constellations and how did they act in them? The project traces how, for example, in the Danubian principalities of Wallachia and Moldavia, supra-regional polycentric communication spaces, nodes of political, cultural, and religious mobility emerged that left a lasting mark on the Orthodox world.